Because ALL One Needs IS Music - Todd Haynes' I'm Not There 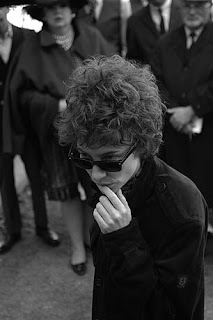 I don’t think one chooses music. I truly believe it chooses one. I was asked recently why I'm such a fan of indie music. I remember saying something like, 'well, I suppose I was born that way. Or something. It's one of those truths, you know? You just know it. Sort of like knowing your name, you just do, you know?' The awkward-sounding answer made full sense to me. Can't say the same for my interlocutor.
And it didn't matter. I had my playlist to fall back on and therein there's safety.
Having a soundtrack for the quotidian experience is as indispensable as air. This is one of my inalienable truths. Without it there can be no inspiration, hence no good production of creativity and forward-moving notions.

I remember growing up feeling no ounce of attraction to traditional music. Yet, many around me were all about it. I suppose it was one of those truths I wouldn’t be able to decode till much later. And I did. The reason why I’m a full endorser of Todd Haynes’ I’m Not There, the Bob Dylan-inspired and –informed film is because it provides a beautiful 'reading' of music. 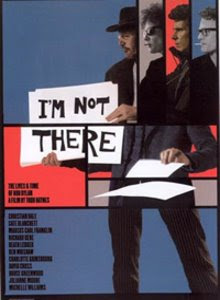 When Dylan, while portrayed by Cate Blanchett, utters the below-quoted text, I thought, ‘yes, I now know fully what this means.’ It was one of those very rare moments when cognitive and experiential truths align ever so perfectly, and as the film also says, "yesterday, today, and tomorrow are all in the same room."
Blanchett's version of 'Dylan' says:
“Traditional music is too unreal to die. It doesn't need to be protected.
I mean, in that music is the only true valid death you can feel today, you know, off a record player. But like everything else in great demand people try to own it.”
I fully concur. Just like the music-loving Socrates in Nietzsche's Birth of Tragedy I, also, believe that music is, indeed, the ultimate form of expression, more adequate and capable of capturing human emotion than language could ever be.

And while I meant the post to be a review of the Haynes' film, it turned out to be a modest tribute to music, the ultimate expresser of thought and emotion.
Having stated that, I'm Not There is not just a must-see, it's a need-see and need-study. And who else to 'Virgil' us through the portals than the master himself, Bob Dylan?

"...music is, indeed, the ultimate form of expression, more adequate and capable of capturing human emotion than language could ever be."

thus is my struggle with language. it's so finite, and it seems the more words you learn the harder it is to express oneself with them. the more we know the more we realise how we fail. music ebbs and flows better than common verbal communication. this blog entry of yours might have been my favourite one to ever read.

This, this touches.
Yes, I concur... "I don’t think one chooses music. I truly believe it chooses one."
This might just be the piece that truly rings the truest.... Thank you!

Remember this? "but you guys have nothing in common, you're, like, so different!"
"Eh?! We like the same music! You find that insignificant?!"
End of story.
How I love this....

"And who else to 'Virgil' us through the portals than the master himself, Bob Dylan?"
Exactly!

Bri,
What did you make of the director's choice to feature a black boy and a woman to portray some of the Dylan versions?
Hm.

I forgot to include my favorite line....
Having a soundtrack for the quotidian experience is as indispensable as air.
Hm.

No other medium is as powerful as music. It makes the most stoic of us choke up when it surprises us with Beethoven, Bellini, or that thing you keep talking about called INDIE.
Regardless of the genre, it, music, is bigger than most things and the reason we can find some solace in individual expression. I always think of the deaf Beethoven and how Music never truly seems to have ailed him.
How grateful I am for that.
And how 'touched' I was too to read this rather sweet but true account/review.
Thanks, you closeted opera fan.
Show me an Indie rocker and I'll show you an opera season ticket holder :-)

Talk about a Freudian slip....
I meant to write: 'how Music never truly seems to have *abandoned* him not *ailed* him....'
Even though, I quite like the ailing/torturing aspect of music vis-a-vis Beethoven's adversity....
I'm now full of thought, thanks to this!
It's easier being out of it, thought, that is.

I relate to this 'Traditional music is too unreal to die. It doesn't need to be protected.'
I tend to be drawn to the other. Good film.