Scorcese Does The Stones 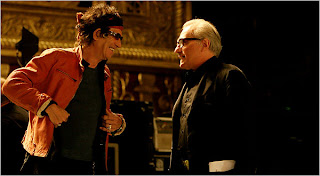 Let's face it. The Rolling Stones have always been relevant. They're as present as, well, let's see, death and taxes. And the new Martin Scorcese film proves just that: The Stones are here to stay. Permanently.
Mortality has no claim on them. They actually seem to have bought it out.
I tend to be aware of a good number of my daily structures and even though I lean more towards glam/punk, I still find myself mentioning the Stones very often. They've penetrated my speech, hence they're personally relevant as well.
I'm still not sure how Keith Richards manages to be alive, or how M. Jagger still moves and looks the way he does, but the fact is, they are and always were extraordinary performers.
So, during a lukewarm cinematic season, this film is bound to entertain.
As the Times piece notes,
"This is a concert film with frills that places you on the stage with the band and, with a finely trained eye, observes the musicians’ interactions with one another and with the audience. The visual rhythms and unobtrusive editing reflect the contradictory status of the Stones as a majestic rock institution and a gang of down-and-dirty bad boys thumbing their noses at propriety while scooping up all the girls."
Read full text here.
Posted by B.R. at 8:14 PM

"Mortality has no claim on them. They actually seem to have bought it out."
Ha. I liked this 'structure.' These guys were always meant to stick around and since humans can never get 'no' satisfaction, they're bound to be around us to sing about it. It's really a question of 'ontology' as you might say....

Jagger and the other Stones get it. They don't just know how to make music but as Florida mentions in his Who's Your City?, they also get economics and the value of performing their music in big, new international cities. They must have a heckova team....

First there were the Stones, after that who really cares?!
I guess the reason why they're in such high demand is because they seem to be the only performers who have 'gotten' the idea of what it means to live in perpetual youth....