Gloria Steinem Speaks Re: the Presidential Race, Gender, and Race 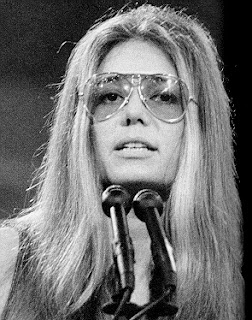 Gloria Steinem's blog today in the NY Times is about race, gender perceptions, females, and the presidential race. Incidentally, I could have picked a more recent picture of Steinem, but this is too good not to feature here.
Steinem discusses Clinton's femaleness and Obama's race and how they are viewed and read generally by the voting public.
She observes:

'So why is the sex barrier not taken as seriously as the racial one? The reasons are as pervasive as the air we breathe: because sexism is still confused with nature as racism once was; because anything that affects males is seen as more serious than anything that affects “only” the female half of the human race; because children are still raised mostly by women (to put it mildly) so men especially tend to feel they are regressing to childhood when dealing with a powerful woman; because racism stereotyped black men as more “masculine” for so long that some white men find their presence to be masculinity-affirming (as long as there aren’t too many of them); and because there is still no “right” way to be a woman in public power without being considered a you-know-what.

I’m not advocating a competition for who has it toughest. The caste systems of sex and race are interdependent and can only be uprooted together. That’s why Senators Clinton and Obama have to be careful not to let a healthy debate turn into the kind of hostility that the news media love. Both will need a coalition of outsiders to win a general election. The abolition and suffrage movements progressed when united and were damaged by division; we should remember that.'

I am of the opinion that attitudes toward gender, work performance vis-a-vis sex/gender have shifted considerably in modern times and this kind of shift seems traceable in pop culture, modern literature, cinema, et al. I hope that this instinct I am speaking of here is soundly informed and that it reflects a more general attitudinal shift re: sex/gender and race. I am simply reacting to Steinem's piece which does come across a tad dated to me.

But I also see Steinem's point in that she is referring to a general voters' mentality. Again, how she chooses to 'read' this mentality could be a tad problematic but she seems to make her point clearly enough. Read more here.
Posted by B.R. at 11:08 PM

Her point is entirely biased. I realize that it is rather difficult for most of us to be able to master the art of 'balance' but....
Steinem should also be more realistic and kind in her assessment of the voters. Thanks for reducing many of us to cliches, mother Steinem.

I really think that Steinem and others like her are hurting more than helping the Dems!
Her arguments were so-1970's!
She should read that Jonathan Haidt guy you once blogged on.....
Did you, btw, read Arianna Huffington post today? I don't think I care to rad the HuffPost any longer!

What did you make of the media's fascination with Hillary's tears? Even The View mentioned it today.