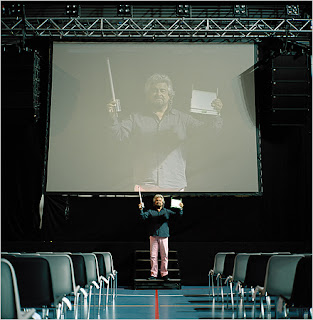 I am interested in Italy on account of my personal history and as a result I follow the socio-cultural developments in the country with some measure of regularity. The following NY Times article attracted my attention today. It's on the politically and socially aware Italian comic Beppe Grillo.

'“Basta! Basta! Basta!” Beppe Grillo, a 59-year-old comic and blogger with swooping gray hair, howled in an interview. The word means “enough,” and he repeated it to make his point to Italy’s political class clear. In recent months, Mr. Grillo has become the defining personification of Italy’s foul mood. On Sept. 8, he gave that mood a loud voice when he called for a day of
rage, to scream across Piazza Maggiore in Bologna an obscenity politely translated as “Take a hike!”'

The Accounting-trained stand-up comic whose critical 'reading' of Italian politics can be traced decades ago and is well-known to Italians and many Europeans, is actively involved with social reform. Grillo is one of the best-known Italian bloggers and he has managed to evoke much interest among the young in Italy. He is encouraging young people to run for public office in an effort to engender good political reform. A lover of the internet, he is employing cyber space tools actively and his blog receives much daily traffic. Grillo himself is not interested in running for political office. His sole mission seems to be one of informing the masses about the political nature of things and why they need to be proactively involved with their government and the goings-on in the Palazzo Montecitorio, i.e., the Italian parliament.

I suppose in the case of Grillo, we see an artist who considers art, in this case his stand-up routine, as functional to a specific socio-political mission.
Posted by B.R. at 6:50 PM

bravo, beppe. good example of the workings of democracy. anyone can comment on anything.

beppe grillo said on the new york times bit that information is within easy reach in this new era, mostly thnks to the internet.

I don't know. I read such things and I can't help but think how backward Italy still is. I know you'll disagree with me on this, but what Grillo is saying is not that special and if more Italians were out blogging and participating more actively in tech. forums, there would not be such a new cult around a comic turned blogger. I read about him and I say to myself: 'that's so 5 years ago! E allora?'

Grillo did note that he is not anything special and that the fact that he is internet literate is allowing him to expose major socio-political problems in present-day Italy. I very much enjoyed reading about this, actually. But then I have also seen some of his stand-up so I might be biased somehow.