V for Vendetta: Remember, Remember the 5th of November 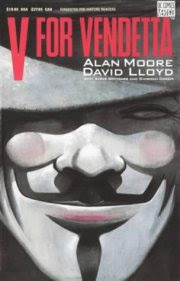 Just re-viewed snippets from the 2005 film "V for Vendetta." What particularly stood out this time was the cornucopia of v's uttered by the character of V to the Natalie Portman character.

V: Voilà! In view, a humble vaudevillian veteran, cast vicariously as both victim and villain by the vicissitudes of Fate. This visage, no mere veneer of vanity, is a vestige of the vox populi, now vacant, vanished. However, this valorous visitation of a by-gone vexation, stands vivified and has vowed to vanquish these venal and virulent vermin van-guarding vice and vouchsafing the violently vicious and voracious violation of volition.

love that sentence: remember, remember the 5th of november. i thought you'd for sure post something on that day with that title....

Alas, though of it days before and a day after but not on the day. Hm. Irony, this is thy name.

what a sentence! Who knew so many V's could coexist in the same sentence.

Portman's 'British-oid' accent bothered me, but it's a good movie overall.