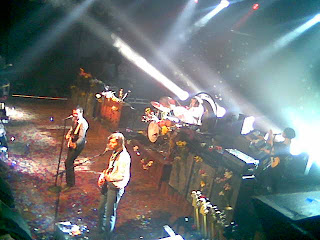 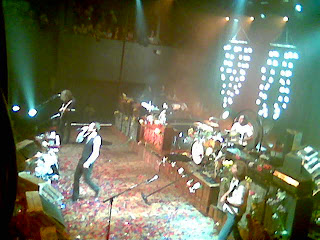 When I saw The Killers in concert last May I knew I was in the presence of rock&roll greatness. I started liking them back in 2004 when they released their freshman album, Hot Fuss, and I have yet to be disappointed.

Every single song of theirs is a finished product. There are no drafts or rough edges. They don't make albums that contain only one or two decent tracks and a number of mediocre concoctions. The Killers aim to please. Thoroughly.

Their second album, Sam's Town which came out last Fall was another superb project. It contained one hit after another and a true fan of this productive band appreciated their obsessive compulsive tendencies, for this band is indeed perfectionism-bound.

In their last tour, while promoting their sophomore album, I was surprised to notice that they didn't play, what in my view, is their signature song i.e., "Glamorous Indie Rock&Roll." Whenever people ask me to define the term 'indie rock' I usually suggest to them that they listen to The Killers' "Glamorous Indie Rock &Roll" track.

No explanations are necessary afterwards. It is that good.

Two weeks ago I was happy to find out that they are releasing a 'B-sides' project entitled Sawdust which, among other things, contains a duet with the legendary Lou Reed as well as the incomparable "Glamorous Indie Rock & Roll." Here is a list of the featured songs.

I was happy to see that there is nothing mediocre about this album either. These chaps have captured the spirit of rock&roll from the nascent phase of their work and continue to do so to this day.
A definite must-have album. And if you they are playing anywhere near you, go see them. They sound live almost the way sound on their tracks. And Brandon Flowers' stage mannerisms are fluidity epitomized.
Posted by B.R. at 11:39 AM

"somebody told me/ you had a boyfriend/ who looked like a girlfriend/ I had in February..."
The gender 'fluids' as you call them. These guys deserve their mega-ness, I agree.

Right. I noticed their 'fluidity' when 'Somebody Told Me' came out. In concert, they appear quite 'fluid' as well.

The Jacques Lu Cont remix of Mr. Brightside is brilliant!

just discovered the track 'leave the burbon on the shelf.' it's fantastic!!

it's one of the few examples where extreme popularity does not take away any layers of artistic ability. they simply are good and talented.