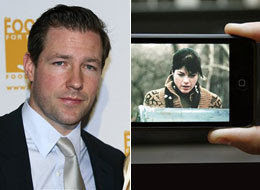 About his decision to release his new film “Purple Violets” on iTunes instead of the big silver screen, Ed Burns observes the following:

"You don't need to be sitting in a massive theater to experience two people sitting on a park bench trying to figure their lives out.…A lot of my stuff you could almost listen to it as an audio play, there's so much wall-to-wall dialogue."

Reading the news this morning I was mildly entertained by how Burns’ innovative cinematic and commercial approach to film was discussed by David Sarno of the LA Times.

It’s interesting, I think, how people’s computer and gadget choices seem to reduce them to certain cultural clichés. Hmm. You’re a Mac user, you must be one of ‘those’ people. If nothing else, such speech is entertaining. To me, at least. This is what Sarno wrote when informing us of Ed Burns’ iTune release of “Purple Violets” and Apple’s involvement in distributing it.

“…you can see why Apple liked the film. Its mix of wealthy young lawyers and wealthy young artists, and its unending string of plush cribs, seems well suited to the company's carefully cultivated aesthetic -- you know, artsy and hip, but with a dash of world domination. "Is that the ideal way you'd want someone to watch your film?" said Burns of the new iPod. "No. But does it look pretty" -- uh, darn -- "good?"”

Anyway, be that as it may, I'm looking forward to Ed Burns new project and the small screen of the iPod won't be a spatial adjustment at all. Bigger is not always better.

he's chik/cool. i like the idea to market directly from iTunes. will have to check it out. grazie!

i watch movies on the iPod all the time. don't know why people would have a hard time with the small screen. I mean that's why they opt for a VIDEO iPod in the first place, no?
and the 'mac stereotype' tends to be true most of the time, i find. to that i say, 'maccer, and proud of it.'

I've always liked Ed Burns. Guy can act and he's directed 9 films already. He does not seem to privilege uber-commercialism over artistic quality and that's, of course, admirable. I'm watching Purple Violets too. And the iPod screen works just fine for me too.