Angelina Jolie Writes for the Economist 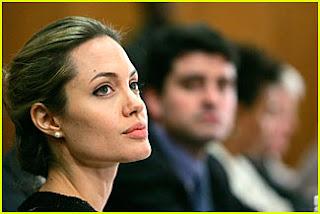 Angelina Jolie has written an article for the Economist. It came out today. The Economist's annual issue "The World in 2008" features Jolie's take on the situation in Darfur.

Some bloggers have noted that Jolie should stick to acting and forget about her 'UN stuff.'

A human being is capable of performing many functions and roles at the same time. One function does not preclude the presence of others. An actor may and can be a politically and socially aware person, just like an academic can find joy in rock concerts and San Diego surf shops at the same time.

Kudos to Jolie for wanting to make a difference and bringing awareness to many things of substance in the world arena.

Here is a quote from her piece which I thought was well penned.

“Accountability is perhaps the only force powerful enough to break the cycle of violence and retribution that marks so many conflicts.”

Yes. A person can self-define a number of way. Granted, her being Angelina Jolie helps with the Economist. I also think she is doing some good things in the world. Will read her article.

It's admirable that she has been making such good choices. I'll also read it.

I'm with you! Angelina is smart and articulate. Using celebrity to influence social and political behaviour? What's new? Kudos that she's doing it consciously.