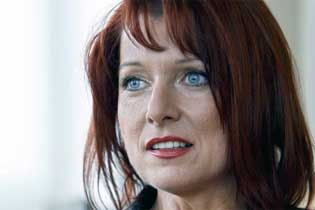 Gabriele Pauli, a controversial politician has shocked Germany by suggesting the so-called "seven-year itch" could be dealt with by limiting marriage contracts to that period.

Twice-divorced Gabriele Pauli, who is attempting to become leader of the ultra-conservative Christian Social Union (CSU), believes anyone wanting to stay married beyond seven years should have to apply for an extension. The partnership would otherwise be automatically dissolved.

Speaking at the launch of her manifesto, she said: "I firmly believe marriages of the future should be locked in to a time period.

"The basic approach is wrong ...many marriages last just because people believe they are safe. My suggestion is that marriages expire after seven years. I know that after this period many marriages reach a crisis point.

"It is false to go around with a notion that marriages are always super and intact."

The CSU has dominated Bavarian politics since the Second World War. It is the sister party of the conservative Christian Democratic Union - which is led by Angela Merkel, the German chancellor.

Well, I take this as quite a notion especially since it's coming from the CDU center of Germany, i.e., Munich itself.

But, come on, Pauli, 7 years?! You are suggesting too specific a 'solution' to what you seem to regard as a fundamentally fluid notion. An itch does not have to be 7 years old, does it?

she just might fare better in hollywood. first the scandal, then the popularity. :-)
another possibility for Jay Leno to crack 'Euro' jokes on the tonight show!

In my view, it's simply the notion of yet another bored, twice-divorced socialite! There are many other relevant issues she could concern herself with. Pauli seems to try to appear 'enlightened' but sounds like a high school student on the debate team discussing the 'sides' of marriage.